A place of mystery and imagination. What must it have been like to live high on the canyon wall in a cliff dwelling 800 years ago? Who were these people? Why did they spend up to 70 years building such large stone communities only to abandon them a few years later? Why did they leave? Where did they go? Many questions; few answers. Perhaps it is the mystery of Mesa Verde that draws us there. The architecture of the ancient cities is both stunning and massive. Shadows play on the walls and windows as the sun makes its way across the sky. Bathed in the warm light of sunset, the cities appear to be constructed of solid gold.

Today, Mesa Verde is set aside as a National Park located in southwestern Colorado midway between Cortez and Mancos on U.S. 160. The main attractions at Mesa Verde pertaining to photography are the massive cliff dwellings. Spruce Tree House, Cliff Palace, and Balcony House on Chapin Mesa and Long House on Wetherill Mesa are the largest. Most of the ruins require a short hike along paved trails but the elevation (>8000 ft.) and the intense sunlight can make getting around a little difficult if you are arriving from sea level and/or carrying 40 pounds of camera gear! Be sure to always take a lot of water and something to snack on for energy. It can get quite hot in the summer so dress appropriately and keep your film in a cooler. 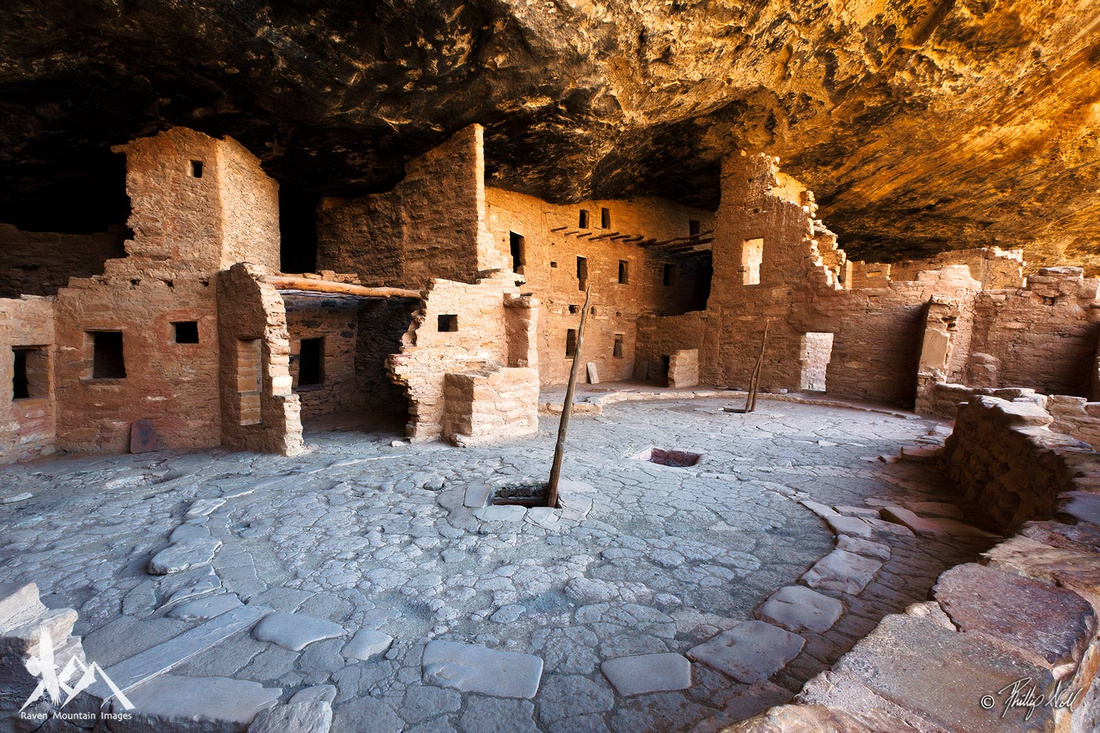 Spruce Tree House is open to the public throughout the day. Visitors can climb down a ladder into a restored kiva and take their time viewing the ruins. Rangers are on hand to answer questions and provide information. Spruce Tree House, which faces southwest, receives interesting light in the late afternoon and early evening. Many compositions are possible as the evening light dances across the ruins. Multiple story buildings, T-shaped doorways, round kivas, and square towers are some of the subjects found here.

The other three large ruins that are open to the public require Ranger-led tours. Cost for the tours is $2.75 per person per tour and tickets can only be purchased at the Far View Visitor Center. Each tour is roughly an hour long. Carrying your camera gear, setting up, shooting, and staying with the tour can be challenging, especially for Large Format shooters! Stairs, ladders, and very small tunnels force some photographers to “travel light” when touring the ruins.

The early morning or late afternoon light at Mesa Verde generally exceeds the dynamic range of film and digital sensors due to brightly lit walls and very dark shadows in the recesses of the alcoves. Print film may allow for a little more dynamic range than slide film, however, bracketing or very careful metering is recommended. Digital shooters can make two exposures, one for highlights and one for shadows, and combine them later in Photoshop to extend the dynamic range of the scene. A polarizing filter is not generally necessary due to the elevation. Shooting in overcast conditions will even out the light within the alcoves allowing for easier metering and eliminating the need to bracket. If shooting color film in overcast conditions, use a saturated film to bring up the colors a bit. 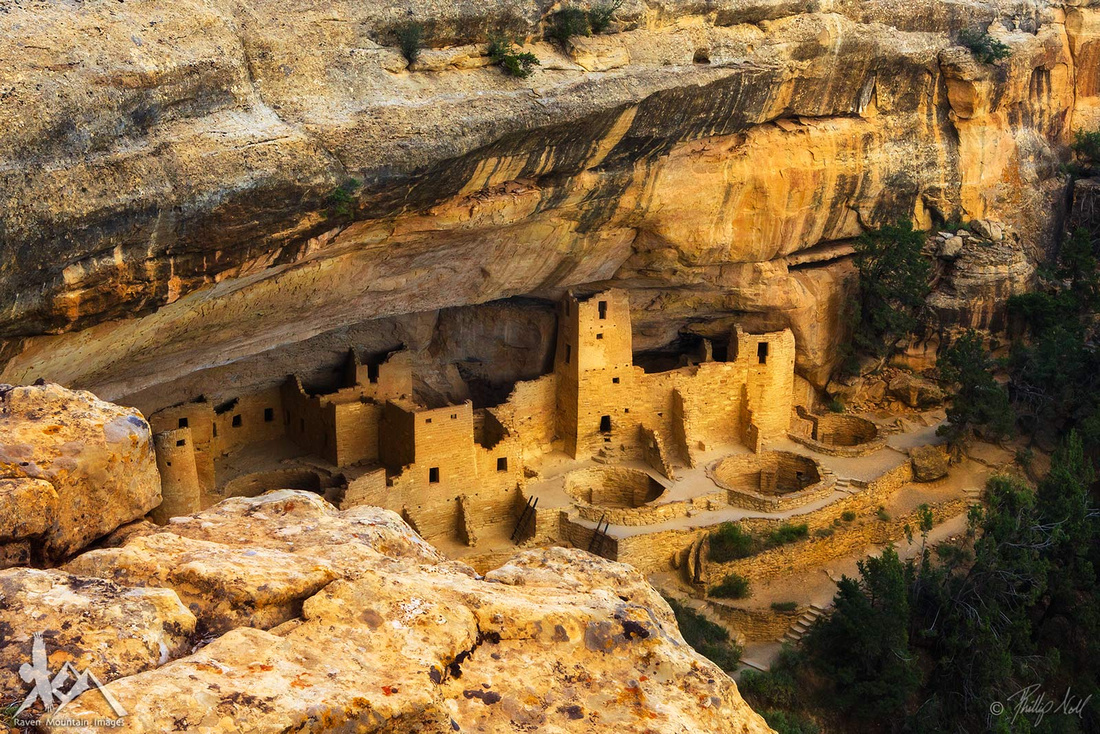 Golden CityRMI-0711-CO-01820
One of the Seven Cities of Gold? Perhaps. Cliff Palace does take on a golden hue in the late afternoon. Mesa Verde National Park, Colorado.

Cliff Palace is the largest of the ruins with 150 rooms. It boasts both square and round towers, kivas, T-shaped doorways, and many other rooms. This ruin also faces west-southwest so the best light is in the late afternoon and evening. The 5:00 and 5:30 pm tours tend to have fewer people as many tourists head out for dinner at about this time. Carrying a full camera backpack and tripod is not a problem at Cliff Palace. Plenty of time is allowed for photography as the Ranger talks about the ruins and the people who built them. 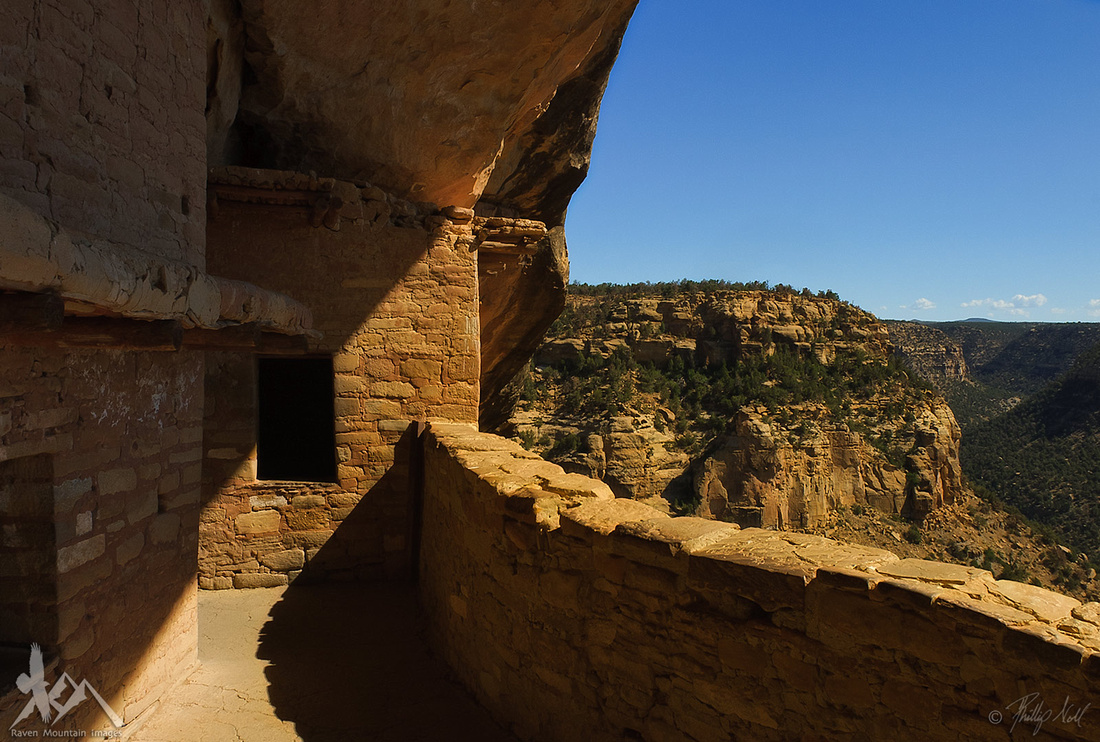 Balcony HouseRMI-0604-CO-00058
In the thirteenth century, Native Americans built an impressive and secure living space high above the canyon floor. The kivas, plazas, and 40 rooms of Balcony House were accessed via a 32 foot ladder and several tunnels and passageways. Mesa Verde National Park, Colorado.

Balcony House is one of the few ruins to face east, thus a morning tour is recommended to catch warm light on the structures. Entry into Balcony House requires climbing a 30 foot ladder and crawling through several very narrow passages. Exiting the ruin requires crawling through a tunnel, climbing a ladder, and then climbing up the cliff face while holding on to chains! For these reasons it is recommended that you travel light at Balcony House. Use a faster film or set your digital camera to a higher ISO so that you can get sharp photos hand-held. Use a photographer’s vest instead of a backpack and carry only one or two lenses; one being a wide angle lens. Once inside the ruin, take in the impressive view down the canyon from the main balcony. Remember to bracket as you shoot the ruins!

Square Tower HouseRMI-0604-CO-00027
The four story high Square Tower House has sat in a protected alcove for over 800 years. It was the tallest man-made structure in the United States until the mid 1800s. Mesa Verde National Park, Colorado.

Another very photogenic ruin is Square Tower House. This ruin is closed to the public but can be viewed from an overlook. Facing southwest, the four story Square Tower House has dramatic light in late afternoon.

There are many other subjects to photograph within the park including mesa top ruins of various styles, beautiful canyon views from the overlooks, wildflowers, and wildlife. Several wild horses seem to have taken up residence in the canyon next to the Far View Visitor Center and mule deer and coyotes are abundant throughout the park. There is also a large petroglyph panel along the 2.8 mile Petroglyph Point Trail in Spruce Canyon. If you have the time, a trip to Wetherill Mesa provides photographic opportunities at Long House, Step House, and views of Kodak House.

Photographing Mesa Verde takes some planning to be at the right place at the right time and to know what to carry at the various sites. Don’t leave your photography to chance! Talk with the Rangers, plan your tours, carry only what you need, and be prepared for wildlife! A visit to Mesa Verde will become forever etched in your memory and a little planning will pay off with spectacular photographs of a very unique, mysterious, and scenic location.